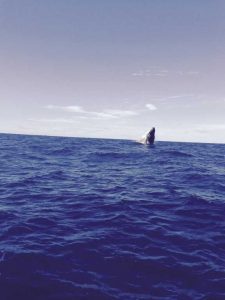 The whales have been amazing this month with quite a large number of them travelling past close to Wolf Rock.

When seeing them so close to the boat you really get an idea of just how big these animals are. They grow to a length of around 18 -19 metres with the females being slightly bigger.

The sound of their exhalation as they spout is quite loud and makes such a distinctive “shwoosh” sound, so you know they are there even before you see them.

It’s interesting to note that humpbacks travel in distinctive groups for their migration north. The first we see are the females who are just about to wean their young calf they gave birth to the year before.

The next group is made up of both male and female sub-adults and these will be the most playful.

About three weeks later we see the mature males and resting females and then the pregnant females are last, as they have been fattening themselves up to give birth and then feed their new born calves in warmer waters. 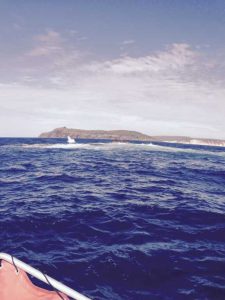 Grey nurse sharks are still here in big numbers and we are seeing between 20 and 30 of them with the first of the boys having arrived early in the month.

We suspect there could be up to four males here already.  A lot of the females are still heavily pregnant with only a few that look like they are here for the next mating season.

Large schools of trevally, mackerel and barracuda have been hanging around the area and there seems to be quite a few little whalers chasing the smaller fish around.

Visibility has ranged between 5 and 20 metres throughout the month and water temperature is now 19 degrees.