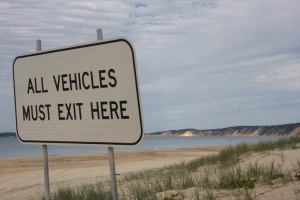 Beach Exits We have been trying for a number of years to have the beach exit signs at Rainbow Shores replaced. Only one remains and it is badly rusted. So far, we have had no success. Earlier this year, we tried again, this time by contacting our local member, David Gibson. He obtained advice from the Minister for Environment and Heritage Protection who was of the opinion that the matter was the responsibility of the state as represented by the Department of Natural Resources and Mines (DNRM).

He informed us that although it is not their responsibility, Gympie Regional Council (GRC) would be prepared to work with DNRM should the department decide to legitimise public access through this unallocated land. When we contacted the State Land Management Unit of DNRM, they understood our concerns, but any decision about action is delayed until the Inskip Master Plan is finalised. We wish to thank David Gibson for his assistance and we are hopeful that we may be getting somewhere at last.

Bullock Point A letter was sent to GRC about the neglected condition of Bullock Point, but we were informed that this is state land and that the council is also concerned and has asked the state government to develop it appropriately as part of the master plan.

Path Hazards One of our members walks frequently on the tarmac path that runs past the golf course at Rainbow Shores. He has concerns about the potential hazards of roots that have broken through the surface in a number of places, the pools of water that remain after rain and the slippery moss and leaf litter.

He has emailed GRC and our local councillor, Mark McDonald, to ascertain who is responsible for its maintenance ( or lack thereof), and what can be done to have it upgraded, but has not received any reply despite a number of months having passed.

Lost and Found Lastly, a small but significant issue. There is no permanent place at Rainbow Beach for people to take items they have found, or for people to try to locate lost articles. This has been brought to the attention of the local police, who can see value in such a facility, but a decision to have a ‘Lost & Found’ at the Community Centre or elsewhere would require endorsement from a higher level . As a holiday destination, lost and found items are perhaps more prevalent than elsewhere. Hopefully, we will have such a facility in the short, rather than the long term.

The next meeting of the association will be held at 7pm in the SES shed on 12 August 2014. All current and prospective residents and ratepayers are most welcome.