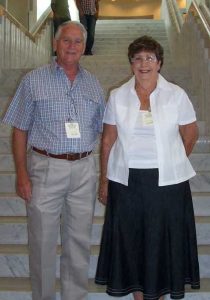 Farewell to Nev and Jan Holt, who lived in Rainbow Beach for “24 years and one week”.

Still settling into their new apartment at Maroochydore, they remember “happy times” here.

Said Nev, “We purchased Rusty Taylor’s Real Estate business in December 1992 and became a First National R.E Franchise, and over the years won numerous State Awards and a few National Awards. We were supported by a loyal following of property owners as well as holiday and permanent renters.”

Members of the renowned (and noisy, says Nev, but now defunct) Rainbow Beach Wine Bottling Club, they also joined the Rainbow Beach Commerce Association. He served as president and took over the running of the Fishing Classic for a few years, after Ruth Modin retired.

Nev was granted Life Membership of the Supporters Club, having joined the Surf Club as a committee member and served for 13 years in total, on both committees.

“I was also a member of the Council’s Community Centre Steering Committee and have been a registered Justice of the Peace/ Commissioner for Declarations for some 41 years now.

“We were married in 1965 and so far have managed to stay married for 51 years.

Our children, Damon and Taryn, and our three grand children, Oliver 13, Abigail 11, and Benjamin 3, are much happier now that we are closer to them.”

They say best laid plans sometimes do not run smoothly, as they found out on their moving day.

“The removalists did not arrive until about 2.30pm (they had been booked for 10am) and did not leave until 5.30pm. Jan and I were sorry that we did not get to say our goodbyes to our neighbours and other acquaintances, with whom we had enjoyed many good times while we lived and worked in Rainbow Beach,” said Nev.

They are still in a saga of unpacking and stacking, but look forward to putting their feet up and relaxing.

After such a busy working and volunteering life in Rainbow, it sounds like it will be well deserved.

They plan to visit Rainbow soon and say hello, should anyone wish to contact the Holts, their new phone number is 53708405.