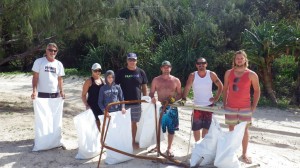 “QPWS rangers worked alongside the volunteers helping to pick up rubbish and provided several 4WD tray-backs and a truck for transporting rubbish from Teewah and Double Island to the Noosa refuse tip.

“Along the 50km of beach from Noosa North Shore to Double Island Point, the volunteers did an amazing job and cleaned up.

Nearly two tonnes of rubbish, including half a boat’s cabin, two portaloos, broken camping chairs and tables, and several fold-out marquees was removed.

Craig Macintyre from Surfrider Foundation said “Normally along our local beaches, rubbish is about 50 percent from beach users and 50 percent washed in from ships or elsewhere, but this time, just after two long weekends and school holidays, it was clear about 80 to 90 percent of the rubbish was from campers.”

“Thanks to everyone involved in getting a good result in a bad situation, including those who were driving by and stopped to assist.

“Surfrider Foundation is a volunteer organisation – we are surfers and activists, because we want to keep our beaches clean for our kids and their kids,” he said.

National Parks Minister Steve Dickson said, “I’d encourage everyone visiting our coastal parks to pick up a bit of extra rubbish and keep our beaches looking good. We shouldn’t just wait till the big cleanup days to act.

“If you are heading up to Cooloola or Fraser Island for the June long weekend, pack an extra rubbish bag,” he said.