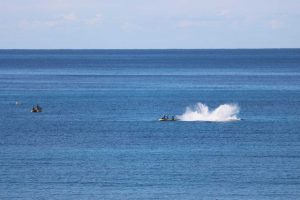 Boating and Fisheries received a call at 8am this morning from the drum contractors who service the region, advising a whale had been caught in the Rainbow Beach shark nets.

Department of Agriculture and Fisheries District Officer, Matt Albiez from the MART team, brought his team from Noosa and met up with another team from Mooloolaba to try to disentangle the whale safely.

The sub-adult male was eight to ten metres in length and was wrapped around the net three times like a corkscrew.

“It was wrapped from the dorsal fin to the head.” Mr Albiez said. “The strategy was to start cutting the net basically moving from the middle to the head.”

“It was quite calm and good most of the time and just had a little splash when its tail caught as it was being freed.”

One team followed the whale to make sure it was travelling okay before it left them and headed south.

Mr Albiez said it was quite possibly on its own as it was a ‘teenager’ and they hadn’t spotted any other whales.

While some people are opposed to the nets and questions as to why the nets were still out during the whale mating season he said: “From our perspective, with the whales some large sharks follow on and so we try to keep everyone safe.”