Home  »  Fishing   »   Whiting tricky to catch at the moment 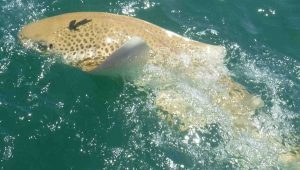 This Leopard Shark was snapped before its release

by Tin Can Bay Fishing Club

Owing to the very unsettled weather we have been experiencing lately the opportunities to get out on the water have been limited to a few short periods.

By keeping a close eye on the various weather forecasts these periods of settled weather can be taken advantage of, whether it is to get to the outside reefs or in the bay or up the creeks.

The periods of hot weather should be firing up the Mangrove Jack into a feeding frenzy, but to date there has been a lot of time and effort between fish, both for the lure and bait fisherman. Hopefully the next full moon period may see them more active.

The Summer Whiting that congregated in good numbers seem to now be spread out and it is difficult to catch more than a few. The flathead have also gone a bit quiet in the last couple of weeks with only the odd one being caught.

Maybe the fish have gone into hiding in preparation for the holiday boating traffic? The local reefs have been producing a few quality fish, but not in good numbers.

Various shark species seem to be ever present on the reefy areas and can be a bit of a problem. One species that is occasionally caught is the Leopard Shark which is well worthy of a photo with its colourful spotted skin, before it is released to harass the next fisherman.

There should soon be some Spanish Mackerel coming into the bay and it may be worth trolling various larger lures around the Inskip and Bluff areas to entice a strike.

A large school of golden trevally was seen in the bay recently, but weren’t interested in taking a lure at the time, but fishing for them at dawn and dusk could prove productive for a bit of fun.

Borumba Dam could be an option for fishing, as good numbers and quality of bass have been caught recently on bait and lures and there is a good chance of a saratoga.

The water police have been out lately drug and alcohol testing and checking safety gear in an effort to keep us all incident-free on the water.

With the largely increased holiday boating traffic on the water, we all need to take a little more notice of what others are doing on the water and at the boat launching sites, as some may have little experience in boating activities.