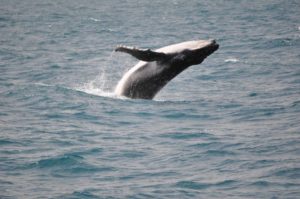 As whale season begins, our Government is reminding Queenslanders to keep a sharp lookout for these precious creatures when out on the water between now and early December.

Minister for Environment Leeanne Enoch said the first of the giant mammals had arrived in Queensland waters and humpbacks would soon be migrating in their thousands on their way to the Great Barrier Reef to have their calves and find mates.

“Saving the humpback whale from extinction is one of the world’s great conservation success stories, and it’s wonderful that we can still share the seas with these beautiful creatures,” Ms Enoch said.

“From a low of about 500 humpbacks visiting Queensland when hunting stopped in the 1960s, this year about 33,000 whales are expected to head north along our coast, with a few thousand new-borns as the group heads south again. More whales bring tourism benefits, but more risks to boaties and others using the water.

“A fully-grown humpback is 40 tonnes of unpredictability. Without warning, they can slap their 5-metre fins and enormous tails, and breach right out of the water or under your boat.

“In the Whitsundays last August, a very unlucky group of fishers suffered injuries when a whale breached right under their boat during the day.

“Reduce the risks by keeping a watch at all times out on the water, and observe the approach limits. Be especially careful at night, as whales will still be on the move.

“Remember that whales are curious creatures and may nudge your boat. If you are worried about safety, slow down and steer away from the whale immediately.

Ms Enoch said jet skiers were not allowed within 300 metres of whales or dolphins.

“We had disturbing reports last year of jet skiers closely chasing whales and the whales changing directions. One jet skier was issued with a $630 fine,” Ms Enoch said.

“Other vessels can approach to 100 metres, unless there are already three boats at that limit, in which case skippers need to stay 300 metres away. In the whale protection zone of the Whitsunday, Lindeman and Gloucester island groups, where many humpbacks deliver their calves, no boat can go closer than 300 metres.

“Boats cannot travel at more than six knots or create a wake within the 300 metre caution zone.”

Ms Enoch also said there were provisions for “special interest whales”, such as Migaloo.

“No one can bring a boat or jet ski closer than 500 metres or fly an aircraft closer than 610 metres to white whales such as Migaloo without authorisation,” she said.

“The ‘special interest whales’ declaration was made to prevent harassment.

“Migaloo appeared off the Gold Coast on 11 July 2017. He’s been seen in Queensland waters nearly every year since 1991, and we hope he’ll visit this year.”

Ms Enoch said swimmers also needed to keep their distance from whales and dolphins. All the details about approach limits are at https://www.ehp.qld.gov.au/factsheets/pdf/wildlife/marine-mammal-proximity-brochure.pdf

“If you want to see the whales up close, take a whale-watching trip,” she said.

“The skippers will idle or stop their vessels, and whales will quite often approach. Hervey Bay and the Sunshine and Gold Coasts have many whale-watching tours, and there are plenty of opportunities in Great Barrier Reef waters.

“You can get a great view from land, too, at headlands along the southern coast, such as Point Lookout on North Stradbroke Island, Point Cartwright at Mooloolaba and Point Arkwright at Coolum,” Ms Enoch said.

More whales also brings the chance of more strandings, especially newborn calves. Report strandings as soon as possible to the RSPCA on 1300 264 625 (1300 ANIMAL).