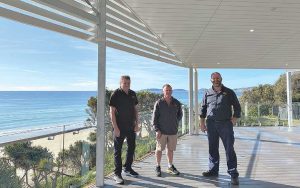 Wind down on the Surf Club’s NEW deck

Surf Club Manager, Ray Holland, said it was the culmination of many years’ work, and excitingly is only Stage 2.

Stage 3 will be work on the pokies area, new kiosk and entry. The last stage includes a whole new surround and outlook for the bar. Which is a good thing because the extra seating for 120 requires greater capacity from the bar. Plus more dollars for keeping our beaches safe!

A huge round of thanks must go to the Supporters Club Committee and DRM Constructions.

Rainbow Beach General Practice, led by Dr Andrew Spall, has some land earmarked for a new medical centre in Cooloola Cove, near the Sands Shopping Centre.

Practice Manager, Lauren McGaw says, “It’s a while away yet! The vision is for it to become a specialist centre incorporating general practitioners and visiting specialists such as orthopedists/gynecologists/neurosurgeons, etc. As well as a pathology provider.

“My vision would also be to have a body mapping/skin and laser section as well!” said Lauren.

NEW developments on the go

There are other new developments you’ll notice as well – the Fire and SES Station is progressing (opposite the Community Hall) – a service station at Ross Creek, Goomborian, as well as a Rainbow Beach shopfront in the works!  Stay tuned…