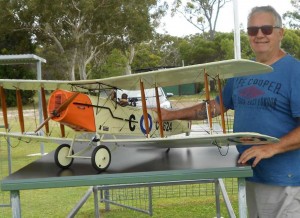 Dave Carkeek with Neil Low’s model Bristol F2B, which first flew in 1915 – the best British fighter to come out of World War One

Keep the weekend of April 30 and May 1 free this year for the Tin Can Bay Model Flying Club’s annual Warbirds event.

This is the premier event on the Southern Cross Air Force’s calendar each year and is supported by members as far away as Toowoomba, Brisbane, Sunshine Coast, Gold Coast and north to Gladstone.

During the year the local club purchased a second-hand, reel-type mower from the Country Club, and this will ensure the runway is in perfect condition.

“I appreciate the work done by members and in particular honorary member Peter Harvey, who looks after the mowing and maintenance of machinery with his brother Grahame,” Club  President Dave Carkeek said.

“We are looking forward to a huge influx of visitors and the local public for this event,” he continued, “and we will be catering for them in our canteen as usual, with hamburgers, soft drinks etc, and this year we will also have hot chips available. 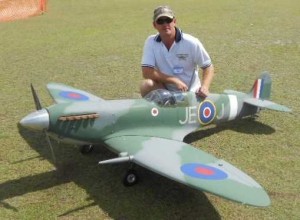 “We are also hoping for a number of jet aircraft, but as usual, this will depend a lot on the weather for those travelling long distances,” he concluded.

The average number of model aircraft is around the 100 mark, including helicopters and multi-engined planes. This is way above the numbers at other Warbirds event, of which there are 11 during the year.

Pilots will start arriving from the previous Wednesday and camp at the field for the duration, some not leaving until Monday or Tuesday. The fact that this is now once again the Labour Day long weekend should boost numbers.

The club has two showers and toilet facilities for the campers and public, making it one of the best equipped fields in Queensland.

The Warbirders all love to come here – they tell us “the atmosphere is electric”. Even if it rains they still enjoy the camaraderie and the opportunity to exchange ideas on models and flying.

So don’t forget, bring the kids out to the field on Kidd Straight on the long weekend in May!