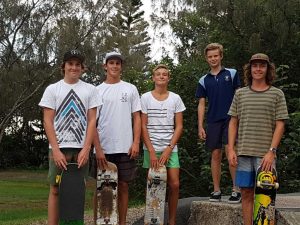 Local Year 8 student, Hugh Gilmore, wrote a letter to Mayor Mick Curran for feedback on the Revitalisation Plan for the skate park.

Noting that the initial plans occurred years ago, and that skate facilities have changed in that time, he hoped that council could include: “a big bowl, a big speed ramp, quarter pipe with a big bank after the quarter pipe, a big thumb box, 7ft half pipe, a shade protecting the whole park”.

The Mayor advised that the comments have been included as part of the feedback for the Revitalisation Plans.

He was notified that upgrade works will likely have the existing skate park facility remain with additional equipment/area developed to the northwest side.

Hugh also asked when construction to the new skate park would begin.

At the time, the priority for implementation of the Revitalisation Plan was:

The inclusion of the upgrade of the skate park in future capital improvements programmes will be reviewed against other priority projects throughout the region.

BJ Parton from the Rainbow Beach Boardriders is also seeking feedback, “I was wondering if there is anyone out there who would like to see a little more added on the skate park.”

BJ remembers the local lads who started the skate park, “The Butt Family and all the special helpers in the Boardriders at the time used to have a BBQ and a band set up with a few comps here and there. It was great!

“So we are thinking if we can get it running again that would be sweet!”

The Community News has asked council to invite our young locals to work with their team to ensure the most up to date skate facility was built for Rainbow Beach.

A modern skate park is important to many members of this community, as well as attractive to visiting families.