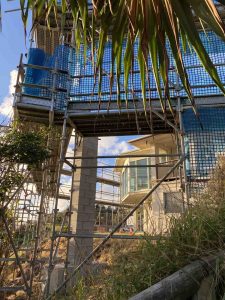 “This place here is the chook raffle from 50 years ago,“ President of the Supporters Club, John Greaney joked.

What he means is, all profits back then and now, have been channelled into making our beaches safe.

The Rainbow Beach Surf Club is a fundraiser for our lifesaving patrols, and each upgrade over the years helps our lifesavers and funnels even more cash into the volunteer service.

“We’ve been building in stages so that we can handle the financial burden,” John said. “This is a 6-8 week build – just the deck at this stage, with an internal fit-out at a later date.

“We should be able to seat another 120 on the deck, undercover, and with uninterrupted views from Fraser Island to Double Island Point. Everything is tailored to maximise the views we have here, and utilise it as best we can.”

Dean and Robina McEwan, from DRM Constructions, started the build in 2013 with the stage 1 – dormitory block, toilets/utilities and downstairs office.

John says the next stage will hopefully be six-to-twelve months after the deck is finished. The pokies room will be relocated where the old toilets were, and a cafe and a whole new entry made out of the old office.

“You can feel confident when you have a drink or a meal at the surf club that the profits go directly to the patrols at the beach,” said John.