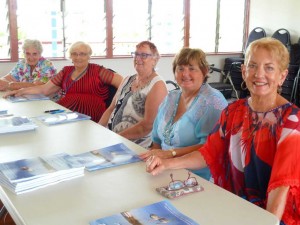 The Tin Can Bay Writers’ Group has been meeting for nearly two years each fortnight at the library here in Tin Can Bay. Originally we met to discuss novel writing and we ‘morphed’ into creating short stories.

Several members had been published writers for many years, but the ‘newbies’ were welcome as well!

Late in 2015 we decided to take our collections of short stories, poems and a short play; select the ones we felt worthwhile, and publish them as a single book.

We first contacted a variety of agencies for funding, then tried ‘Kickstarter’ crowd funding; finally simply funding it ourselves. We are very grateful to Lyn at Gympie Graphics for all her advice and efforts, as well as being our official publisher.

Waves and Ripples was chosen as the title – stories large and small – as we all have an affinity to the sea, living in Tin Can Bay and Cooloola Cove.

Our book was launched on Saturday March 12 at a splendid party held in the Tuncunba Hall.

Some 30 people were there to celebrate our ‘opus’ including two council hopefuls who took time out from the ‘hustings’ to join us, and not a single mention of elections was noted!

Waves and Ripples is now available at the Tin Can Bay newsagent or by contacting us on raewyn.oliver@y7mail.com or 0412995512, $30 per copy.