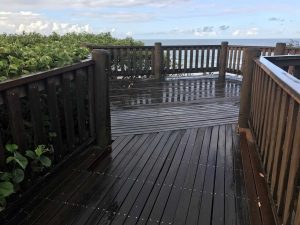 It is a question we put to Council last month after reminding them that the cotton tree around the lookout was overgrown. Already, you have to move to the corner of the lookout to see the flagged area on the beach and across to Fraser Island.

Regarding the lookout last week, we were told: This activity is not budgeted for annually and there are no further plans to prune the cotton trees on the embankment in this current financial year.

When I asked for more information: Council has established a program of pruning the cotton trees along the foreshore three times per year. Ideally they are pruned at a time that allows them to allow some regrowth before holiday periods.

This work was carried out in the last week of November and is expected to occur in the first week of March, prior to the Easter holiday.

I sent Council images of the lookout view and headland taken on December 10 – only a couple of weeks after the pruning.

Even then – although tidy – the effect was more like a “trim” than the much-needed “haircut”.

This is an issue we address again and again.

We thought it was resolved in 2014, when Cr Mark McDonald assured us of the cherry picker required for the “second tier” of trimming.

November 2014: It is an issue that Cr Mark McDonald said was fought very hard over the last few years. He assures the community that the beautiful view from Fraser Island to Double Island Point will be restored.

He said Council was given the necessary approval to maintain the cotton tree to a level of 1.6m, as it regenerates very quickly. He will be discussing this matter further with the Acting Mayor and council staff to provide a swift outcome.

December 2014: Pruning of the second tier of cotton trees at the lookout has occurred and budget allocations are in place and a program to maintain these areas ongoing maintenance has also been established. Council indicates that this issue is now fully resolved.

He reassured Rainbow Beach and coastal residents that the cotton tree he has had successfully pruned is now in a regulated pruning regime.

“It is our endeavour, that it will never get out of control again and in the near future will be fenced. It is vital that now we can see the ocean, we maintain that aesthetic.”

July 2016: The pruning of the cotton trees which grow from the lower car park is a major exercise requiring an elevated platform vehicle to access these trees.

The frequency of addressing that section of the cotton trees is less than that where Council crews can reach from the ground.

And the response in January 2018: (Editors note: corrected from 2017 as reported in the printed edition)

Council acknowledges the concerns that have been raised and has commenced a review of the maintenance activities across the Cooloola Coast.

This is a detailed exercise to understand the service levels we can provide with improved scheduling and current budget, as well as identifying any additional resources that may need to be considered in the forthcoming 2018-19 budget deliberations.

So, it seems they are not using the cherry picker, in fact it is not even in the budget any more! The view is already overgrown. Is this another thing locals will have to do themselves?