Home  »  News   »   Have you ever seen snow falling over Double Island Point before? 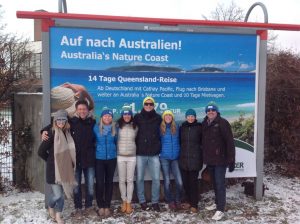 Look closely in this month’s cover photo and you actually see snow falling over Double Island Point. In a very exciting coup for Rainbow Beach, this image is featured on billboards in Germany – Munich, Dusseldorf and Mannhiem – for January and February.

The partnership with Tourism and Events Queensland (TEQ) Europe and Explorer Fernreisen (a leading German tourism wholesaler) reinforces this region as the new “go to” destination.

“You must understand that they could have chosen any destination in Queensland for these billboards.This is a fantastic recognition of the region and the work many have been doing to develop the relationships and the awareness of Rainbow Beach,” said Destination Gympie Region’s Andrew Saunders.

The impact of the billboards was reinforced by 22 Queensland tourism operators in a week long spin around Germany, Italy and Switzerland for Queensland on Tour Europe.

“These operators are going to considerable expense to go to Europe and promote the region and their business. All will benefit,” explained Andrew.

Tanya Beech from Rainbow Ocean Palms said, “The response has been fantastic and I have proven that selling the destination really captures people’s imagination and Rainbow is considered an attractive new product with the market.

“The strongest interest was from companies already doing business in Queensland and looking for new product that can be incorporated into existing self-drive itineraries.”

Rainbow Beach and the Great Beach Drive were very well received with lots of questions about travel times, transfers and hire car from Brisbane airport.

Meanwhile, Visit Sunshine Coast reports flights from New Zealand to Queensland are up 30 percent and the same image of Double Island Point has been selected for a promotion in Auckland, Wellington, Christchurch, Napier, Palmerston North, New Plymouth, Queenstown, Dunedin, Nelson and Invercargill.

Andrew announced that from February 1 to 25, there will be outdoor media (billboards, buses, bus shelters) plus significant digital media (banners, Air NZ website etc) behind the campaign.

He said that TEQ and international brands have invested significant money to roll out these two international campaigns with product from this region because they believe it will fill seats.

“This belief in the destination,” said Andrew, “puts Rainbow Beach in the same category as a Cairns or Whitsundays.”

RBCT President, Mark Beech said, “The international market is an important segment that fills rooms midweek and during the quieter periods of the year.

“There is no doubt that cooperative marketing campaigns like this are driving the increases we are seeing in international tourists to Rainbow Beach.”