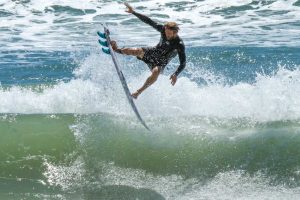 Rhys Smith moved to Rainbow Beach around March last year and found a job as a surf instructor for Epic Ocean Adventures, which he loves.

He spends every day in the ocean, driving up to Double Island Point on the beach – everyone says he has the world’s best job!

Rhys grew up in Bargara and his love for the ocean began early, learning to surf when he was seven years old. He visited a surf shop in Noosa, where his mum picked up his first board, and soon after came his first sponsorship when he was eight.

He went to the junior series for five years competing and signed with Billabong, but tore his groin out and it was just getting too much. “So I went to uni into film production – with retail fashion and music production.”

Now with a background in videography, Rhys would love to focus on surf videos and improve his free surfing. He recently picked up a Dragon Sponsorship and is planning to enter a few QS events.

“I’m into the free surfing scene,” Rhys told the Community News. “This year I will be competing in world qualifying events, but I am focusing on more my free surfing, videos and photo shoots.

“I’m well rounded in small waves, but I’m training and conditioning my body to surf in bigger waves.”

At 29 years old, Rhys is very keen to push himself to be the best he can be. “I’ve been doing a lot of cross-training, getting really fit.”

So what is free surfing all about? “Free Surfing is about going out there and expressing yourself – focussing more on tricks. You can race down the line, focus on one big ‘air’, when you leave the wave in the air.

“It’s just a progression of the sport with manoeuvres and linking turns together. You experiment with varied equipment, and you have to pick a different line to surf different boards. It’s just all the fun stuff in surfing!”

Rhys admits travelling to surf breaks can be a financial strain at times. “It is really hard to fund it yourself – a sponsor can endorse you a lot more, and I am really focussed on getting more sponsors on board.”

Rhys works with Epic Ocean Adventures as their surf coach, and he kept losing his sunglasses. “I sent my surf video to Dragon and they put me on as an ambassador. Now they send my surf video off to companies that they have in their store, and I have Dragon sunnies to wear!”