As we commemorate ANZAC Day this month, Darren Davies managed to persuade local, Pat Nayler to tell the Community News about his 36 years in the Navy and Navy Reserves. Born in Gympie and growing up in Brisbane, Pat spent most of his working life in Ipswich, meanwhile garnering awards for his services to Australia, including the Medal of The Order of Australia (OAM in the Military Division of the Queen’s Birthday Honours List 1990 for services in the fields of Marine Engineering, Diving and recruiting). 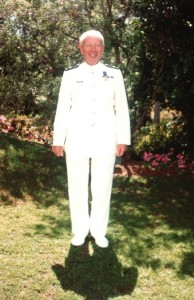 Pat Nayler at Government House, Brisbane after presentation of his OAM

At the age of 19, Pat entered service into the Royal Australian Naval Reserve in 1957. Recruit training was intensive, with theory every Tuesday evening, and weekends of sea training (6pm Friday until 4:30pm Sunday) for six months.

Pat says, “In early 1958 I served on my first and largest ship, the aircraft carrier HMAS Sydney.  As a young engineering sailor on board a steam powered ship for the first time, entering a boiler room through an air lock into the heat and noise was a surreal experience. At 70*C it was like entering hell.

“I was lucky to get tangled in about 40ft of copper pipe which I rolled up and brought to the surface. My instructor, Chief Petty Officer Dixie Foord, thought my “chance upon” was great as the money for such scrap metal would go towards the cost of the diving team’s family Christmas party.”

Upon completion Pat was posted to HMS Sultan at Gosport, England, the Royal Navy’s School of Marine Engineering where he achieved high distinctions in the required courses on Ton Class Minesweepers.

Further postings in England and Scotland, Pat oversaw the overhaul and refurbishment of two minesweepers for the RAN, eventually serving as second in charge of the Engineering Department of HMAS Snipe. On the return trip to Australia, the fleet stopped at Gibraltar, Malta, Port Said, Aden, Colombo, Singapore and Darwin arriving in Sydney in mid-December 1962.

“Being the hopeless romantic I am, I purchased in Malta some yards of famous Maltese lace material for my fiancée Del’s bridal gown.”

Del was 19 and Pat 21 when they met on South Molle Island, but lived in neighbouring suburbs of Brisbane. They were engaged before Pat left for overseas.

From 1962 on, Pat spent another 31 years in the Active Reserve. In his day, not everyone was selected – only those with expertise for specialist naval tasks.

“I was lucky I worked for Queensland Government.” Pat started employment in the Ipswich Railway workshops, then inspected water supply, sewerage and dam projects, eventually retiring as a Principal Technical Officer for DPI in 1995. 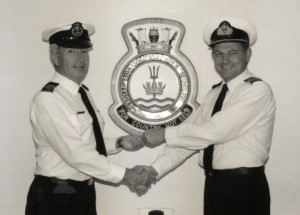 Congratulations on OAM from Commander Young

He was awarded the Australian Service Medal 1945-1975 with clasp FESR (Far East Strategic Reserve) during the Malaysian confrontation. “Closed up at action stations”, their ship was waiting for open fire, tailed and surrounded by Indonesian gunboats, in the little known conflict.

“In the early days of the Vietnam War, I undertook an advanced diving course at HMAS Penguin. As part of this we were deployed to Jervis Bay where the team was to demonstrate some of the methods used by Viet Cong divers to attach explosives to ships.”

“We used many simple ways to simulate attacks on an anchored ship which was about to be deployed to Vietnam.  One method was to use folboats (rubber sheathed kayaks) which could not be detected by radar. Another method was to float under rubbish which we had placed in the water.

“This allowed us to drift on the tide, and under the cover of a moonless night, place our mock explosives on the hull of the ship. This was carried out with the majority of the ship’s crew on alert, and spread around the ship trying to spot us.

“One  night heading to a dive, there was a five metre Great White on the surface. It didn’t bother us, most navy divers were used to them and worked around them – you didn’t think about it. We lost a couple of divers, or some lost a leg to bullsharks – we generally hoped it was too dark at night time and they couldn’t see us!”

Active Reservists were on “24 hours notice” of call up, with an awful lot of hours put in, he said, “These years were hard on my family as I was often away.” Pat undertook many more courses, training crews on damage control and marine engineering, lecturing on nuclear, biological and chemical warfare, and minimising impact of fire, flooding or damage by accident or attack. 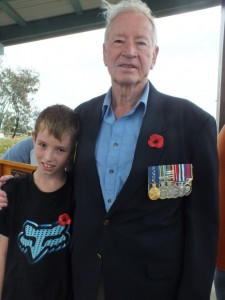 After many childhood holidays spent at Tin Can Bay, Pat and Del retired to Rainbow in 1995, also enjoyed by their children and six grandchildren.

On Anzac Day he remembers his four uncles – and their plaques on the Rainbow Beach memorial wall and a visit to Anzac Cove in 2006. He tells of two graves in the many, a 49 year old lieutenant colonel next to a 17 year old trooper. It brought it home for him, “They both end up just as dead. They are all just people who serve their country and paid the supreme sacrifice.” Lest we forget.

At 1988 Bicentennial Fleet Review on Labuan