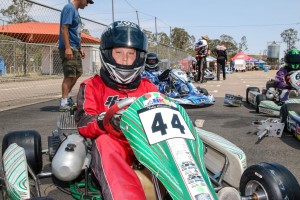 Not many grandfathers would give that advice to a young man. But Toby Chappill’s grandad, Rainbow Beach’s David Scott is not your average guy. He has a lifelong passion for motorsports and has raced at Bathurst.

Toby has clearly inherited this passion from his grandad. “I love go-karting because of the speed and the adrenaline.”

In 2012, at the young age of 13, Toby approached the Cooloola Coast Kart Club for a “come and try” session. The session determined whether he could handle the speed and the forces that karters experience when driving at over 100 kilometres per hour. Toby took to the experience and decided the sport was for him. His family bought him his first go-kart and he has not looked back.

“My family [Afra and Graham Chappill] copes with my racing very well,” he said. “They are always there pushing me to do my best, helping with the costs, pit crewing and taking me from track to track.” And Toby has raced on many tracks, including the Gold Coast, Lismore, Emerald, Rockhampton, Bundaberg and Gladstone. 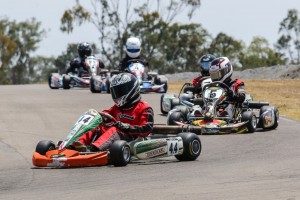 Toby leads the way, he has had a year of brilliant races

Toby has done the circuits and achieved outstanding results. In 2013 he gained the fastest lap time at the Jordan Page Memorial competition. And last year he won the Bundaberg Enduro – a 100-lap race – almost overlapping the karter in second place. Toby also won the Queensland C/D grade titles, came second in the Bundaberg and Cooloola Coast Championships and somehow found time to compete in all four rounds of the Central Queensland series. 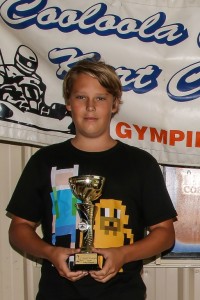 A special moment for Toby was being invited to the Race of Stars on the Gold Coast, which had a big field of 32 drivers, including some from overseas. Before each race Grandad provides Toby with some advice. “You must finish the race to win the race”. There have been close calls, however, but Toby has always completed the circuit.

“I have been in a few crashes but nothing that has injured me. I have had someone try to out-brake me but they ended up going over my back tyre and then driving over me. I have also been in a crash where I had nowhere to go because I was in the middle.  I was forced to crash into someone with the front of my kart, which destroyed my steering rods and steering arms.”

The James Nash student has clearly accomplished a lot in the past few years – but he has a big year ahead of him. This year will see Toby in grade 12, with all the pressures of a final study year combined with a commitment to more racing.

“I have a new kart for this year and will be competing in the senior sportsman. In my new 125cc I can get to speeds of about 130 to 140 depending on the length of the straight. My plan is to compete in the Central Queensland Series again, the state titles, the Cooloola Coast and Bundaberg championships, as well as the invitation only Race of Stars.” 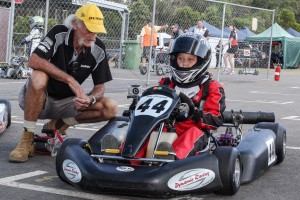 Grandad David Scott gives younger Toby some advice like: “You can’t win on the first corner!”

“At the moment I don’t have any sponsors to help cover costs,” Toby said, “but any sponsorship would be appreciated,” he added. Standard gear for go-karters includes overalls, helmet, gloves, rib vest and neck brace. All this equipment can be pricey, but Rainbow Beach businesses have helped Toby out over the years – and for this he is very grateful.

Another aspect of karting that Toby enjoys is the contact with like-minded people. “I now have friends of different ages and backgrounds who all share my passion for karting and motor sports.”

Go-karting is a sport that develops reflexes, decision-making and precision car control. Many famous Formula One drivers started out as go-karters, including Michael Schumacher and Alain Prost.

And Toby Chappill’s name may well appear alongside these greats in the future, especially if he shares his grandad’s drive.