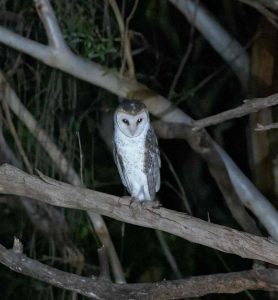 Our beautiful region continues to attract various feathered friends that aren’t often seen in this area.

Recently, a beautiful masked owl and an adorable sooty owl were observed on Freshwater Road in the Great Sandy National Park.

With its endearing heart-shaped facial markings, the masked owl is a very welcome sight, as its population numbers are declining and several Australian states have placed it on the Species Conservation Status list, with Victoria listing it as threatened, and New South Wales listing it as vulnerable.

Everything we can do to protect their natural habitat – forests, woodlands, timbered waterways and open country on the edge of these areas – will go a long way to helping them breed successfully.

Sooty owls are also listed as threatened and vulnerable, so to have them spotted in our region is a real testimony to the importance of our conservation areas.

And not only that, a boobook owl has been heard calling at the Bymien picnic area in the Cooloola Recreation Area, a white-throated nightjar was spotted on a track in the heath off Cooloola Way, as well as a very brief glimpse of a grass owl – showing we are truly a haven for nocturnal native birds.

To top it off, a crimson chat has been observed at the Cooloola migratory bird roosting site.

There’s no better time to take a walk along the beach, or in the bush, to see what may have flown in to call Cooloola home.