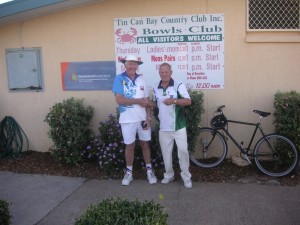 The Invitation 4 Bowls Carnival is held annually in Rainbow Beach over the last weekend in October. The best players from around Qld are invited to compete for prizes to a total of $8000 with the winning team taking home $4000.

Competitor and Club Manager, Rick Modin says, “It is our 20th Invitation Fours. Teams from Northern NSW and as far north as Gladstone arrive in Rainbow including state players and former Australian players. The 64 bowlers work hard for the cash prizes over the two days.”

Locals, watch and cheer on the local team, all day October 25 and 26. If you want to see some good bowls played, with some of the best bowlers around – this weekend highlights the skill of competitive bowling. 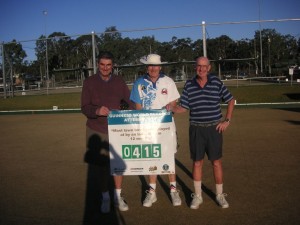 Bowls clubs on the coast received a very different visitor last month. Frank Peniguel from Victoria is on a mission to set this new world record for the most games of lawn bowls played at different bowls clubs in a given length of time.

Don Sutherland, President  of the men’s Tin Can Bay Bowls Club, said he played his 415th game at the Country Club, “He has travelled the full length of the east coast of Australia as far as Cooktown in the north. Frank said that he will then be visiting clubs in Brisbane and NSW Country before heading to both South Australia and Tasmania in his efforts to complete the record in time.” 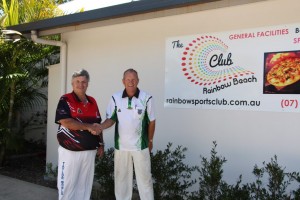 Don said Frank is self funded, but has managed to keep the costs to a minimum by travelling in his 1960s  model VW Kombi van, which is generating a good deal of interest in its own right.

Rick Modin said, “He then played a game in Maryborough and drove back to Rainbow Beach for ten ends in game number 417, aiming for 650 games by January 9, 2015.”