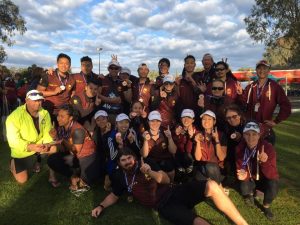 23-year-old Shane Berkhout won a bronze medal at the Australian Dragon Boating Championships, behind him is the Queensland Premier Men and Women’s Relay Teams

He competed in the premier relay team – all men and the top category for fitness. Part of selection included physical testing and satisfactory paddling techniques, vital components for inclusion into the State team. Shane proved his ability at the State Titles March 25/26, 2017, as a team member of the Maroochydore Sea Serpents team, winning two gold medals.

“We’ll need to give him more space in the boat for his head!” jokes teammate, Kerri Southern. “It is a triumph for him, we’re all very proud of him and his achievement.”

Kerri and other team mates have also brought medals home from a Nationals in 2015 when they took a Wide Bay team.

“But Shane virtually was on his own for training.” Travelling twice weekly to train with the Maroochydore Sea Serpent on the Maroochydore River, in addition to continuing training with his club.

The Gympie man, with his own home-handyman and gardening business, has been paddling for almost three years and has been a vital team member of the Cooloola Dragons at regattas and state titles held at Lake Kawana, also the Wide Bay Series Regattas.

Shane travels with 11 other paddlers Thursday afternoon and Sunday morning to train in the beautiful waterways of Tin Can Bay. The club is eager for more paddlers – Kerry hopes he might inspire more men in the region to take up the sport.

Last month, the Dragon Boat Club brought home fourth place from the first regatta of the Wide Bay Series in Bundaberg. Nine of them stayed overnight – and enjoyed a nice Mother’s Day brunch at the Seafood Co-Op And Café over the Burnett River.

Two dragon boats, Sailability, Yacht Club and Coastguard members in various vessels were involved in a ceremony for Gayle Barnett. Her ashes were laid to rest in Snapper Creek with her family. This  included her 91-year-old mother, who went out in the dragon boat and managed to hold Gayle’s paddle up for the one minute’s silence. We were told it was beautiful.