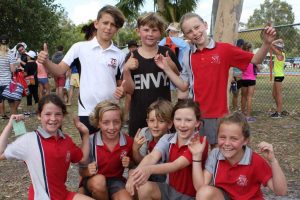 Numbers were a little down this year, but organisers said  there seemed even more family members here to support them.

Teacher Dave Arthur said, “If you get to the golf club, you have gone too far!”. He reminded students that the course followed the esplanade, which meant you stayed next to the water.

Coast kids were well represented  on the day. The Rainbow Destroyers (Archie and Nathan from RBSS) were 2nd in the 12 & U Boys, and Razzy (Jasmin and Ruby from RBSS) was first in 12 & U Girls.

It was great to see so many teams entered from Tin CAn Bay School – 2 made 4th place in the 12 & U division!

Hats off  to the individual competitors. It was hot day, and the swim, bike and run legs are gruelling, but they are so fit – some competitors looked like they could have done it all again.

The organisers  thanked all concerned – including Police, SES, teachers and helpers on the BBQ. Everyone gave Mrs Moy a big cheer.