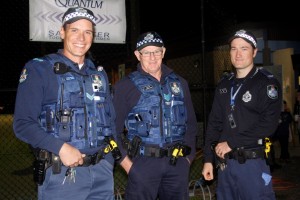 Many years ago, before I made the decision to join the Queensland Police Service, I spent a few years at university studying journalism.

One of the only things I still remember from that time was the idea of the ‘inverted pyramid’ which states that when you write a news article you should put all of the most newsworthy and important information in the first few paragraphs.

This is because readers generally lose interest quickly with any article and stop reading after only a few minutes.

So before you stop reading this article I have some important information for you relating to road closures around Rainbow Beach over the weekend of August 22 and 23, 2015.

This particular weekend marks the fifth instalment of the annual Rainbow Beach Double Triathlon, another great event for our small town.

Competitors of all ages will be out swimming, cycling and running at various locations around Rainbow Beach and to keep them all safe we will be closing certain roads at certain times during the weekend.

There will be the usual diversion in place for those who are happy to drive up the beach to Inskip Point (via Karoonda Road / Rainbow Shores Drive).

I will be posting a list of the weekend’s road closures at various locations around Rainbow Beach prior to the date, and can I please ask that you don’t drive around the beachfront / CBD during the race times, unless absolutely necessary (or you’re on a bike in the race).

Also if you’re planning on coming or going from Inskip Point, please plan your trip to avoid the race times. It would help us out a lot and ensure the safety of everyone competing.

The Rainbow Beach Family Fishing Classic is over for another year and what a great event the organisers continue to put on. For eight days I drove around admiring big boats, big fish and lots of big smiles.

When I took some time off from drooling over the boats on display around town and performed some random breath tests, I came up empty.

In fact no drink drivers, no liquor incidents and no traffic incidents were reported in Rainbow Beach for the duration of the competition, despite some serious pressure on the roads, waterways and boat ramps.

Only a couple of petty thefts at the start of the competition detracted from an otherwise great week.

While the prevalence of drink driving appears to be decreasing, the same cannot be said for drug driving offences which are proving to be an ever increasing road safety problem.

Until recently, testing for drug drivers was the sole responsibility of the Random Drug Testing Unit, and you could regularly see them at work in Rainbow Beach during our busy holiday times.

Now the Road Policing Unit in Gympie has the equipment and know-how to perform these tests and the results are staggering.

In June a couple of officers from Gympie came down to the Cooloola Coast for a few hours of testing and left with six (6) positive roadside saliva tests.

That’s six people driving around the Cooloola Coast with a level of impairment similar to a drink driver with a reading of between 0.1% and 0.15%.

With scary results like that you can expect lots of attention to be paid to this area by the Gympie Road Policing Unit.