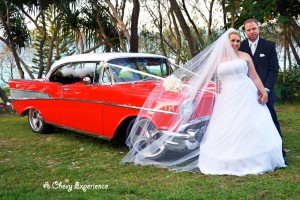 Ninety guests witnessed the marriage of Dave Elder and Carolyn Wall, against the backdrop of beautiful Rainbow Beach, last month.

Carolyn’s sister, Sharon Clark from Gold Coast was matron of honour and bridesmaid, Danielle Mountford from Ipswich attended to the bride. Dave grew up with his best man Greg Waddell from Jandowie near Chinchilla and Groomsman Justin Turvey from Brisbane. Their children Tristan, April, Jack and Paige looked a picture in the bridal party.

People travelled from all over to share in their day. Long time family friends of the bride, Maria and Peter Dowson visited from the Carolyn’s birth place in Orange, NSW and the father of the bride journeyed from Port Macquarie, NSW. Friends Yoshe, Neil, Elliot and Jakson made the trip from as far north as Mackay. 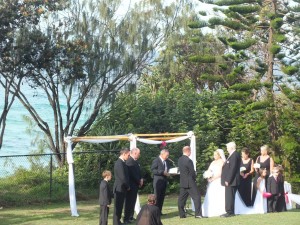 Their reception was held at Rainbow Beach Surf Club with entertainment by local musician Joel Mak. Despite breaking an ankle the day prior, and coping with crutches, Carolyn remained unruffled and was a beautiful bride. She said, “Dave and I have been together almost four years now and it was wonderful to join our two families together.”

The honeymoon was placed on hold until their first wedding anniversary due to the new business, Rainbow Beach’s Roadside Assist program. Carolyn thinks that’s a good thing -considering the leg!