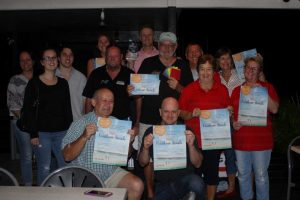 Only one trophy back to Rainbow Beach this year from the Queensland Country Press Association Annual Awards – but still runner up in both categories for Best Paper in Country Queensland (with our sister paper – the Sunshine Coast Hinterland Times).

Rainbow Beach Commerce and Tourism will be pleased that the category we did take out was the 2017 Best Community Promotion for our New Zealand Visit Rainbow Beach insert. Judges said it was an “outstanding international promotion of Rainbow Beach as a tourism destination” and outstripped any other entry in that category. Previously we have won this category with the Pig Day Out fundraiser.

For the 2017 Best Newspaper under 10000 circulation judges said we were only two points behind the winner from Laidley: “Always a quality newspaper. Stitched and trimmed and high quality print. Photos well cropped and composed, with a good use of bleeds on selected pages.”

In the 2017 Best Newspaper employing under 2 Journalists, we were third place after Noosa News and our other paper, the Hinterland Times.

Judges explained, “Most of the publications were extremely close when comparing journalism, and photography, but the winning entries also really excelled in advertising and production scores.” 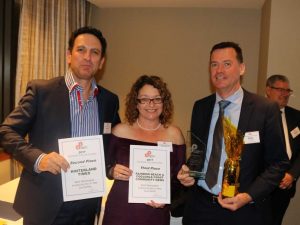 “Join the Surf Club” was Highly Commended for the Best Locally Produced Print Advertisement  due to its clear message, illustrations, information and strong appeal.

Judges loved that ours and other papers were “still very relevant to your local markets, extremely parochial, and passionately focused on local issues”.

There is no doubt, we are very blessed with our top notch team – our writer Barb Rees, designers Darren, Sally and Leanne, sub-editor Victoria who checks everything with care (I do love her heading in the Police Beat report this month), and website folk Wayne and Leisa!

No wonder both our publications were crowned Best Newspaper in Country Queensland last year, and were a whisker away this year.

The team are motivated to improve our unashamedly parochial and proud publication further in 2018, so look out for more innovation – please send us your ideas.

Heatley and I thank you – our readers and our advertisers. Without you this community resource would not be here. Please support the businesses who help us get the news to you!