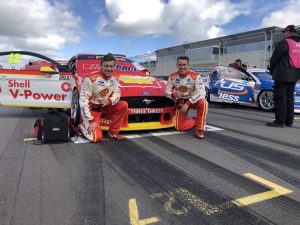 Before he was the number two mechanic on Fabian Coulthard’s car at Mount Panorama last month, Toby Chappill lived in Rainbow Beach and raced go-karts.

After graduating from James Nash in 2015, Toby moved to Albury to take up one of only 15 Cert IV spots offered in Motorsport Technology with Motorsport Training Australia.

While his passion was go-karts he said he, “considered himself pretty lucky to receive the opportunity”; so jumped in with both feet.

Toby said: “I studied for two years and in my second year I was doing placement with different teams including the Dick Johnson Racing Team in 2017 at Winton. The team at the end of the weekend offered for me to go to more rounds.

“I kept doing that for a while and at the end of the year they offered me a permanent full-time job as the number three mechanic.”

Toby is now living at the Gold Coast full time and is the number two mechanic for the Shell V-Power Racing Team and works on Fabian Coulthard’s and Scott McLaughlin’s cars.

And if you didn’t know, Scott McLaughlin was crowned Bathurst champion for the first time in his career last month and has just become the Drivers Champion for 2019.
“It was an honour travelling and working with people you have grown up admiring like Fabian and Scotty and meeting people like Craig Lowndes.

“I was a bit out of my comfort zone initially, but it’s such a pleasure to work with a team that has grown to be like a big family. We spend so much time with each other travelling that it’s important we work well together.”

And the highlight? “The one thing that stands out, the biggest achievement was changing the wheels of the winning car at Bathurst. Just being a part of the pit crew at the biggest event of the Australian Racing Year was amazing …….and winning was insane.

“After the Gold Coast crash, we spent a huge amount of time preparing an entirely new car for the following round at Sandown.”

Toby said his family had been supporting and encouraging him throughout his life and particularly his grandparents.

I asked if he was living the dream. He said: “Definitely. I didn’t know too much about the industry but I take every opportunity when it comes. I worked as hard as I could towards it, but I’m so grateful for the ‘luck’ and the people that came my way.”