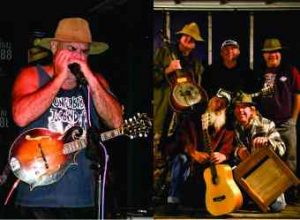 Established over 32 years ago and still going stronger than ever.

Uncle Bob’s Jug Band is (according to them) the world’s most amazing, unpredictable, band of misfits that has been around since the dawn of time and has so many different members the band forgets who is who.

The jug band’s diet consists of beer, grass clippings, and moonshine, they have played all over the country and some members even claim they have been to other planets.

So if you haven’t seen the jug band before…YOU SHOULD! Their explosive performance is not to be missed…with humour, fun, and drinking….oh and music so go check them out. Friday 7 January 7pm at the Country Club.