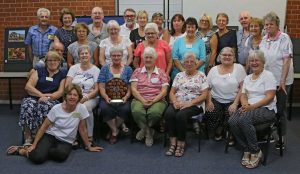 November was a big month for the Tin Can Bay Camera Club which saw the Annual Presentation Night and the judging of the annual Tewantin-Noosa Shield photography competition.

Held annually for PSQ-affiliated clubs, 9 clubs from around south-east Queensland entered this year’s TNS. TCBCC has entered the competition every year since 2008, with a best result of 6th in 2017. This year, the Club once again had entries in all four categories – Pictorial, People, Nature and the Special Subject – Looking Down. The three judges each scored images out of five, for a total score out of 15 points per image. Tin Can Bay images scored consistently high to record a total Club score of 232 – the Club’s highest ever score in the competition. This result put them in first place to take out the Tewantin Shield for the first time, ahead of Peninsula Camera Club from Brisbane, which finished in second place, 5 points behind TCBCC.

The result is the Club’s first win in a major competition and members were thrilled by the result. Our small regional club was definitely punching above its weight, beating many larger clubs, and the high standard of the Club’s images is a testimony to the efforts club members have made during 2018. All are now fired up and looking forward to 2019 and the new photographic challenges the year will bring.