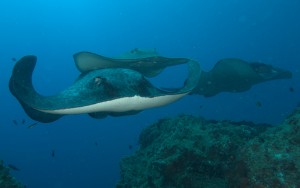 I always enjoy the diving in November. This is the time of year when I think Wolf Rock really comes to life, not that it’s quiet the rest of the year but there is just something more magical as we head into summer.

We are still seeing the same animals, just more of them. Bull rays in particular just love Wolf Rock in summer, it must be the warmer water.

I was lucky enough to observe some interaction between two very large mature rays and a pack of seven juveniles that were swarming on and around one of the mature rays. I’m still not certain what the behaviour was for sure, but my best guess is that it was mating. See it on our Facebook page.

Since then I have been very curious and have done a bit of research. Firstly, they are probably more accurately known as blotched fantail rays but a lot of divers commonly call them bull rays.

The fully grown ray will measure up to between two and three metres across and in length and they will have anything up to seven pups. The pups are only 30cm when they are born and the male reaches maturity once they grow to around one metre. Other than that there doesn’t seem to be a lot more known about them.

Yesterday we had a group of three manta rays moving and grooving over the ledges in about ten metres of water. One of the rays was a massive four metre wing span, but would you believe that they grow to up six metres? 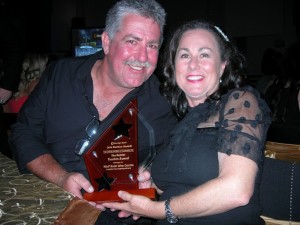 A very Merry Christmas to everyone, stay safe and we’ll see you in 2015.