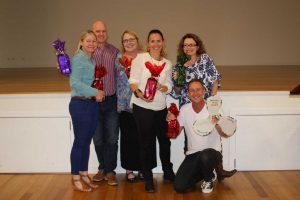 The winning team ‘Resort Power’ were absolutely delighted! (members Heatley Gilmore and Brad Hethorn must have been at the bar)

What is Inspector Gadget’s niece’s name? What colours are on a rubix cube? Who is pictured on an $100 note?  What does KITT stand for in Knightrider? No, it is not “Purrs Like A Kitten”, one of the answers given at the Rainbow Beach State School P&C Trivia Night.

The hint jars were popular – all spare cash was an easy way to gain a hint, or sometimes the right answer – as the bribes increased!

Held at the Rainbow Beach Community Hall, and ably run by the P&C team, the night was once again injected with fun by MC Andrew Hawkins, from Rainbow Beach Realty.

In between identifying artists and their songs, sports, history and other fast-paced rounds,  teams mingled at the bar, indulged in delicious cheese platters and were treated to Arco’s delicious pizzas.

There were two challenges where you had to nominate a team member, and it is not until they are on stage that they are told the task. Fiona Worthington won the sit-up challenge (she says ‘Thanks Emillia!’) and later in the night, Emma Brook enunciated the smoothest tongue twisters – impressing everyone with her flawless delivery and animated expression!

Over 80 locals attended the night, and ‘Resort Power’ were thrilled to win the propeller trophy, followed by ‘Tequila Mockingbird’ in second place,  and tied for third place were ‘We thought this was speed dating’ and the teacher team, ‘Tina’s Tribe’.

Said P&C President, Kirstie Jordison, “We did not expect the numbers. The team events brought lots of laughter, and that’s what you want.”

She thanked everyone involved and all the locals who supported the night. The  annual event raised over $2200 for the school. 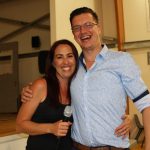 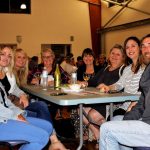 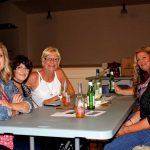 The smallest team on the night, ‘We thought this was speed dating’ had big brain power to tie in third place with the teacher team, ‘Tina’s Tribe’ 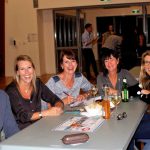