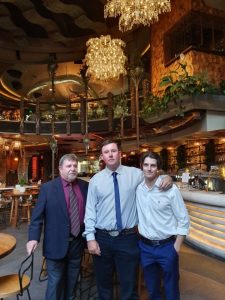 Greg with his father Jim and CCR newest apprentice, Flynn, taken at Brisbane’s Cloudland were Greg received recognition as nominee for Queensland Apprentice of the Year

Greg began life in Rainbow Beach, leaving at age three and returning in 2016 to complete his apprenticeship as a mature age student.

Greg works for Cooloola Coast Refrigeration at Tin Can Bay and said: “What was even more important to me was to be one of four apprentices in Queensland to be nominated for the 2019 Apprentice Award.”

Nominees are measured on their training, career and study achievements as well as their communication and leadership skills.

Employers, David, Lyn, Scott and Kylie said: “Greg stands out, a nice guy with a great work ethic and treats all as an equal. We couldn’t be happier with Greg, he has a great future in the industry.”

Greg said: “I have found my niche. I especially enjoy working with refrigeration systems on cold rooms and trawlers. TAFE got me really intrigued. When you are at work you have a job to do, but at TAFE you get to slow down and study certain aspects and intricacies of the equipment – usually until the teachers ended kicking me out.”

Greg took a few of the other young apprentices under his wing with advice and support during the TAFE Component of the apprenticeship.