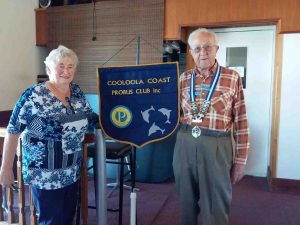 The Cooloola Coast Probus Club has met again in a general meeting for the first time since the Covid disruption.

Seventeen members were warmly welcomed by Arthur Leggo, who was inducted as the new president and it was lovely to all get together again.

Our guest speaker was member Jo Said, who spoke of the recent loss of her mother-in-law. Dolores died in a Victorian nursing care home after catching Covid from a visiting health professional at the home.

Jo spoke of her poor treatment in a regional hospital, and final days of better and more sympathetic care when she returned to the nursing facility.

Jo feels that there is a need for families to speak up to the relevant authorities so other patients in hospital are treated with care and dignity – and their relatives too.

Plans are underway for our Christmas party, an upcoming morning tea, and attending the ‘Afternoon of Classical Music Live in the Woodland’ on  Saturday October 17 at the Cooloola Berry Farm.

The Cooloola Coast Probus Club meets in the Sandcastle Motel in Tin Can Bay at 2pm on the second Monday each month and welcomes new members. Contact Arthur 07-5486 4581 or Katrina at cooloolaprobus@gmail.com