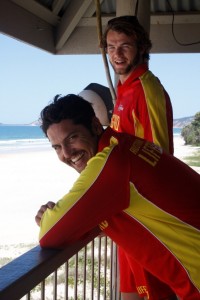 Our Lifeguard numbers have once again swelled for the holidays, and amongst their numbers include our new long term full time lifeguard, Liam Toohey.

When I visited the Tower I was greeted by Liam and fellow lifeguard, Paddy O’Shaughnessy.

Liam and Paddy? They joked about their Irish names, but explained more about their serious role.

“We go through rigorous training every three months for proficiency – scenarios like jet ski work board rescue work keeping sharp with skills and fitness,” said Liam.

“I sent in my resume and was shortlisted. The proficiency included 800m swim and ocean mission, first aid and general knowledge about Rainbow. So I came up on a recon mission and picked Sam’s (Cartwright) brain!”

After working as a casual at Noosa, Liam was thrilled to accept the position, “I’m keen to dig in my heels and spend a bit of time in Rainbow.” But he’s having a difficult time finding accommodation over the busy holiday period.

If you know of a rental – please let Liam know – he is very keen to move his family, partner Georgia and a one year old – Koa up here.

Liam is thrilled with his new job and looking forward to sharing the “small country town vibe” with his family.

“It’s a really good move for me and Georgia I was casual at Noosa – this is what I want to do. This is really positive for us as a family.” Liam enthused.

“Everything is accessible here – everything you need is in walking distance”

Paddy agreed, and said Rainbow Beach “has a charm about it.” He grew up in Yeppoon and has been patrolling for holidays for the last 4 years, working in other small communities as well.

Liam is ready for a bumper holiday season, “There are five of us – myself, Paddy, Sam and brothers Curtis and Michael Forbes.

“There are four stationed here – two in the tower and two roving. The ‘carpark’ [at Double Island Point] has been busy – we’re expecting to be on our toes.”