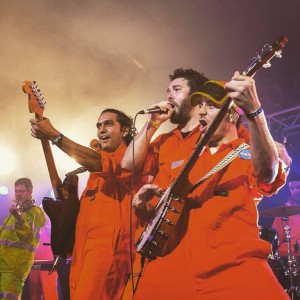 Brisbane’s Smashing Bumpkins are a rollicking bush dance band and they are coming to town.

The Bush Dance will be on Wednesday December 30, at the Community Centre from 7pm to 10pm as part of the free Rainbow Beach Holiday Program, by SU Qld.

Prepare to dance the heel and toe polka, the waves of Bondi, the hokey pokey, the Macarena, the nutbush, the Mexican hat dance, the chicken dance, the Tasmanian stomp, the drongo, the stockyard, strip the willow, Cumberland reel and even the limbo.

If you haven’t been to a bush dance or aren’t sure how to dance, don’t worry – they give simple and clear dance step instruction as well.

In 2014, they became Guinness world record holders when 1150 people helped them break the “world’s biggest madison dance” record at a music festival in Toowoomba.

The group have played hundreds of bush dances before, and in the 11th year together; their aim at of their events is for people to have a great night of dancing.