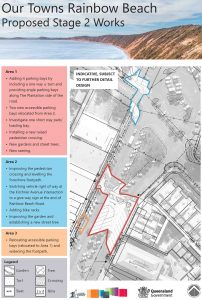 After receiving positive feedback on its proposed design from the community, Council is moving forward with its plans for the next stage of Rainbow Beach’s main street improvements.

Forty-eight people responded as part of the project’s community engagement activities. One of the activities involved walking the street to meet with traders and premises owners to give them the opportunity to learn more and share any thoughts.

Division 1 Councillor, Jess Milne, said it was encouraging that the community was supportive of the design.

“It was great that everyone was generally supportive of our plans, but we also received some good feedback from the community,” said Cr Milne.

“I believe that the refined design has incorporated this feedback and effectively balances pedestrian safety and comfort, with parking needs and traffic movement.

“We’ll be finalising the details of the design over the coming weeks so that construction can commence as soon as possible after the September/October school holiday period,” she said.

Council is planning to complete the first stage of the construction work scope before the December/January school holidays with any of the remaining works to be scheduled for completion February 2021, to minimise impacts during the busiest times.

The Rainbow Beach Our Towns – Streetscape Revitalisation is an initiative of the Queensland Government under the Works for Queensland Program, with $1M secured to deliver improvements across the two stages of the project.