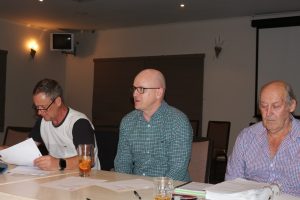 Mark Beech steps down as President of the Chamber

After five years as President of the Rainbow Beach Chamber of Commerce and Tourism (RBCT) Mark Beech announced he wouldn’t be standing for the 2019/2020 year.

At the RBCT AGM which was held last month, Mark said he was stepping down due to business commitments.

He thanked all members and his committee for their support and attendance over the last five years and mentioned the events that had been run, including the Festival of Small Halls and Bush to the Beach.

Tony Stewart moved a vote of thanks to Mark for his efforts and expertise in building the Chamber Membership numbers up and for his time as president.

The incoming president is Matt O’Connell and the committee welcomed Matt who presided over the September meeting.

The next meeting will be held on Monday October 14 at 5.30pm and all businesses are encouraged to join the chamber and attend the meetings.