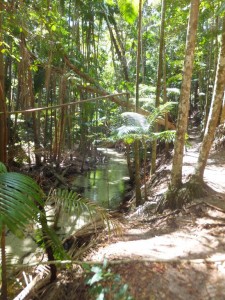 A spokesperson from the Department of National Parks, Recreation, Sport and Racing said that the determination allows the Butchulla People non-exclusive rights to be present in the area, to camp, hunt, gather, conduct ceremonies, and maintain places of importance and significance on their traditional lands in accordance with traditional lore and customs, subject to the laws of the Commonwealth, State and Local governments.

The Queensland Parks and Wildlife Service and the Butchulla People will work together to recognise traditional ownership by considering the use of traditional names for and within the National Park. Places outside of the National Park, are the responsibility of the Department of Natural Resources and Mines.

Recreational activities enjoyed by the general public, such as camping, four wheel driving and fishing, will continue to be accessible through existing arrangements.

There is no foreseeable change in the administration and issue of permits to the general public,  and landholders and businesses will not be directly affected by a determination of native title.

“Their enduring spiritual affiliation to Fraser Island, which they call K’Gari – meaning ‘paradise’, is evident in the island’s creation story. K’Gari was a white spirit from the sky who was changed into an island so that she could stay forever in the beautiful place she had helped to create.

Mr Renouf said the Federal Court’s decision settled a claim that was made in November 2009.

“The determination area includes the Great Sandy National Park to the high water mark but excludes the townships of Eurong and Happy Valley and other small areas,” he said.

Mr Renouf said the determination brought the number of native title claims determined in Queensland to 108 – 95 of which have been resolved by the consent of the parties.

“The Butchulla People have been involved in extensive negotiations with State and local governments, tourism operators and service providers,” he said.

“Those negotiations have also resulted in the signing of a Protected Areas Indigenous Land Use Agreement and Memorandum of Understanding to manage a range of activities – including hunting, camping and the use of traditional place names – within the Great Sandy National Park. These agreements demonstrate the Butchulla People’s commitment to maintaining the cultural and natural values of their traditional country and their aspirations to derive cultural and economic benefit from their special relationship with their country.”