It was all too brief but I believe we made a lasting impression on the American students who visited at the start of July through the People to People program. I must say we live in a wonderful and generous community. It was a fantastic team effort to get it organised and we can’t thank all the volunteer host families enough for their hospitality. 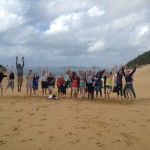 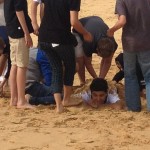 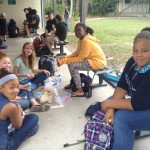 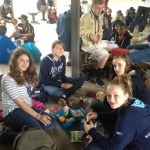 The 41 students and their delegates arrived 5pm Monday 8th of July and were shuffled off to their host families. The majority of our visitors were from Connecticut, but they also hailed from California, South Carolina, and even New Jersey. Tuesday morning was spent at our school where they were put to the test on Aussie knowledge, did some dot painting and a nature walk around the school, and then before morning tea had a game of red rover on the oval.

Unfortunately the weather wasn’t in our favour, so thank you to all the parents who helped ferry them up to the sand blow where park ranger Grant meet us for a guided tour. It was priceless to hear from the students scream, “Oh my God!” and “Awesome!” as they came through the bush to see the sand blow. Watching them sprint across to the other side, makes you realise we really do live in an amazing place.

After an hour we headed back to the cars to take them for a walk on the beach – which ended up being a swim for a few of them. They said, “It’s a rare chance for them to swim at an Aussie surf beach”. Host families then collected them from school by their host families for a social BBQ for all at the community hall. An exciting game of touch footy was played out and the kids of both nations chased, chatted and danced for hours.

Wednesday was an early start and there were a few tears when they departed.

P&C President Tracey Hethorn said “We had some very positive comments from host families. They loved it and would love to host again. Most felt it was a fantastic experience….. overall everyone raved about it.”

Hostmum Fiona Worthington said, “We had two girls from California. Great dinner conversation about differences in living in bustling Los Angeles compared to laid-back rainbow. They were mesmerised by beach drive to Double and jaw dropping Carlo Sand blow.”

I really do believe that lifelong friendships have been made from this experience. There are so many people to thank who made this possible, it was real community effort, and I hope we get the chance to do it again another time. THANK YOU TO ALL!