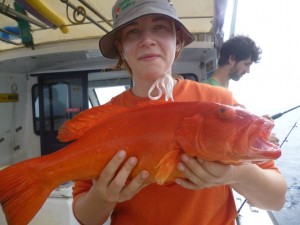 With just six trips offshore in November and three in the first week of December it wasn’t the best end to 2014.

Nearly every weekend seemed to be dogged by bad weather. Throw in 13 cancelled trips in August due to bad weather so fish stocks offshore must be good.

We have mainly fished north-east and south-east on the wider grounds where the parrot have been in good numbers, along with another run of snapper in the last few weeks. Dolphin fish have started to show and they are bigger than the schools of rats we had last year.

Sharks on the wider grounds have been a constant problem, and they don’t appear to be endangered to me. Then throw in the five-metre Great White that came around the boat the other week… they are apparently endangered also. Just don’t swim in the dark!

For those on holidays, please book a few days before you want to go as we are dictated to by the weather man and we need to make up numbers.

To those that supported us once again in 2014, a big thank you. We wish you a prosperous New Year. Until next month – stay safe.