Since kicking off last Friday afternoon the Rainbow Beach Family Fishing Classic has seen a number of cracking fish being weighed in. Several nice Flathead have been caught throughout the Straits along with quality bream to over 1kg. The beaches have seen good catches of whiting, dart and tailor to 3.5kg. The beaches have also been fishing well for mulloway and even the odd Spanish mackerel with a huge 31.5kg specimen being caught and weighed in off Teewah Beach.

The Offshore scene has also been firing well with quality snapper, pearl perch, sweetlip and red emperor along with a number of amberjack from 10-20kg.

Good squid are still about in the bay with a solid 1kg specimen coming from near Ida Island on Thursday.

Don’t forget to drop by the Rainbow Beach Sports Club on Saturday night for the final weigh in and major prize draw.

Have a great weekend and be safe on the water. Here’s some of the team at the Comp: 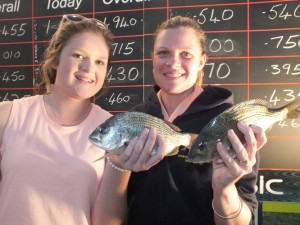