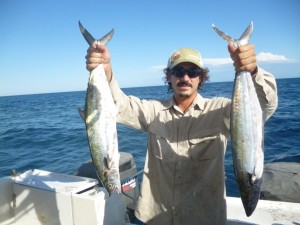 Our last report was sent whilst away interstate, but after 6 weeks we are back in business with 3 Trips over Easter holidays. The last week of our holidays was spent at Corryong, arguably the best pastoral country in this land. Over 15,000 people were present for the Man from Snowy River re-enactment and Stockman’s Challenge. The roads were busy with about 1500 Caravans and Vans plus horse floats from every Australian state.

Back to fishing, and our first offshore trip yielded a couple of mackerel each before we moved further offshore to target reef species. The main species landed were squire, sweetlip, moses perch and pearl perch and gold spot cod.

so we moved further offshore and ended up with a nice feed mainly of squire and pearl perch. Sweetlip, parrot, moses perch and gold band snapper made up the balance of our catch.

Easter Saturday we headed out north east with our target reef species. The crew were from St George and we picked up and unloaded at Tin Can Bay. The boys with sore heads weren’t disappointed as our first drop yielded squire, parrot and hussar. There was hardly any current so we headed further east and landed some good snapper and half a dozen cobia.

Our next reef produced some good early season snapper and more parrot. It was pleasing to see snapper to 6kg this early, maybe we are in for a cracker snapper season once again?

‘Til next month –good fishing.