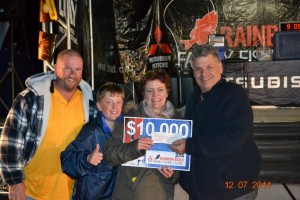 Sharlene Schluter and her family were thrilled to win the $10, 000! Image RBSRC

That was the motto of last year’s Peter Brady Trophy winner.

Ruth Modin said, “The Peter Brady Memorial Trophy is given to a junior or cadet who had the same passion Peter had. Our South African Winner of last year’s trophy gave us a slogan “Never Give Up”. Kale Fullarton is that kind of a fisherman, everyday; and still has the same smile Peter always had.”

“Kale is a very worthy, humble young man. A great flathead fisherman.” (Ruthie says she likes those kinds of fish!)

This is the sixth winner- each one had that relentless quality, fishing day and night for the spoils.

Ruth said the award pays tribute not only to the winner but also to Peter Brady. “He really was a great Rainbow Beach guy. Peter’s memorial date is always around the fishing comp. What a sombre, sad comp. it was, when he wasn’t there. Each year, the Classic remembers Peter’s love of community, family and fishing.”

Considering the number attending the event, it is a love shared by many. A massive 715 people were enrolled in this year’s Classic, exceeding previous years. More families, children and cadets came on board and made the 2014 competition a cracker of an event.

The Sports Club carpark was transformed once again, into an arena, with sponsors’ elevated tent, a lounge/bar, more marquees and a tent full or prizes every night. Family focused it was, kids had a ball whether they fished or not.

Volunteers are the core of the success, with groups organised for food tents, meat and seafood tray raffles and assisting with weigh ins. The Rainbow Beach Fishing Classic allows local volunteer groups to raise thousands for their groups every year.

This year the club ran a Photo Competition and were overwhelmed with fantastic entries – they even added in a new category of Scenic so some spectacular photos could be recognised. The Overall Winner, Amanda Treloar, scored a Go Pro. Other categories were won by Courtney Young (Family), Russel Litzow (Fun), Chris Barnes (Fishing) and Craig Schultz (Scenic).

The 2014 Fishing Classic was an exceptional event, run very professionally thanks to the Sports Club team and sponsors. Judging by the smiles, we’ll see plenty of people back with the “never give up” motto next year!