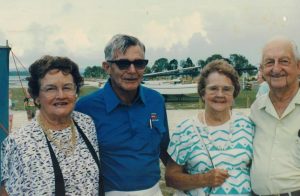 Some of the founders of TCBYC – L to R Doris and Clarrie Noble, Nyria and Sam Murray

This year the Tin Can Bay Yacht Club celebrates its 40th anniversary with a party in December.

40 years ago, it took the combined efforts of a small band of dedicated sailors to bring the yacht club into being.

The catalyst was the inaugural Tin Can Bay to Hervey Bay Race, held on the May Day long weekend in 1981. 118 yachts entered that first Bay to Bay and from Norman Point hundreds of spectators watched a spectacular spinnaker start, in a sight never before seen in Tin Can Bay.

Tin Can Bay was in need of a yacht club which was formed on June 28 1981. Clarrie and Doris Noble, Sandy and Louise Bauer, Sam and Nyria Murray, Harold Baggaley, Des and Jeanette Bickle, Norm and Jill Cummins, Des and Daphne White, Martin and Jenny Leschkau, Bill and June Croft, and Wayne Badley attended that first meeting. Clarrie Noble was elected the club’s first Commodore.

The new club kicked off its maiden 1981-82 sailing season with a sail past on 20 September, 1981 with Clarrie Noble in his yacht Ida leading the fleet at Norman Point. On December 27-30 1981, the club held its first major event, the inaugural Cooloola Cup. Fifteen boats participated, including some of the biggest names in Queensland sailing. 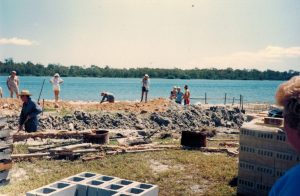 Laying the foundations of the clubhouse

For the first five years, the club’s meetings and functions were held on the lawn of the Murray’s home until suitable premises were found. Despite many problems with the site in 1989 it was ready for a clubhouse. The initial building was never intended to be the final clubhouse, just a temporary home until a larger one could be built.

The plans for this were eventually shelved when it was decided to extend the existing clubhouse. Over the years further extensions have been made and this year has seen additional alterations.

Many members past and present have donated their time and skills to provide the facilities today’s members, guests and visitors enjoy, and their efforts have given members the foundation upon which to continue to develop the Tin Can Bay Yacht Club.