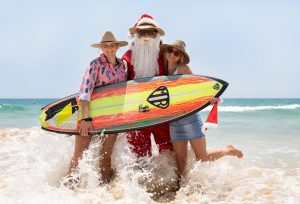 Santa is coming early to Rainbow Beach to party with the community on December 15!

What started out as a humble vision of the Rainbow Beach Community Centre to host a Christmas celebration with the aim to raise money for the school has quickly, and delightfully, escalated into a Community Christmas Party spectacle for ALL!

As a handful of our community tourism operators and event coordinators have come on board, the event has taken a life of its own.

Freedom and Dingos Backpackers wanted to host a fundraiser for the people affected by the bushfires and it just so happened to be on the same date.

After a swift and positive deliberation between all parties we have now all come together and are very proud to present the Rainbow Beach and wider community with Santa Comes to Rainbow – in a HELICOPTER (shhh don’t tell the kids!).

The event will be held in the Rainbow Beach Community Hall and on The Green on Sunday December 15, from 3pm until 7pm.

Of the funds raised, 75% will go to charities assisting people/communities affected by the recent bushfires, and 25% will go to the Rainbow Beach State School P&C who will use the money for school camps in 2020.

Five live music performers are so far included in the line up, plus the Slip and Slide from the Surf Club and a licensed bar by The Sports and Memorial Club.

The event will also include market stalls, various delicious foods and beverages and as mentioned, the early arrival of the big man himself with his sack full of goodies for the children.

Come along and enjoy this community event for all ages.