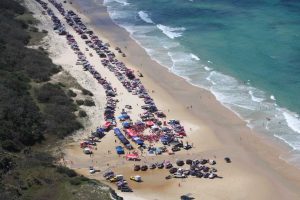 You can see from this Pink Run fundraiser, that generally Teewah Beach has plenty of sand for vehicles, unlike last Easter, where wash-outs have provoked a Noosa bureaucracy. The Pink run is on October 20 for 2018 – Image taken on board Rainbow Beach Helicopters

Noosa was unable to grasp control of our coveted beaches in the recent electoral boundary realignment, instead Noosa Mayor, Tony Wellington has formed a ‘Teewah and Cooloola Working Group’.

Hardly information that would be ‘top secret’ the group declined to offer a seat or  minutes to the Community News.

Instead, I was surprised by a 500-word diatribe from Mayor Wellington.

He told us, “Please understand that I cannot guarantee the involvement of both QPWS and QPS in particular if there are to be media representatives at our meetings. That would put a very different slant on the discussions if media were present, and it may also impact on the participation of State employed officers.”

Firstly, what Mayor has the time to lead a simple working party? And why would he be bothered to commit eight paragraphs to the keyboard over an issue that he declares is “simply an information sharing exercise at this stage”?

He reassures me, “Note that the Working Group is not a decision-making body, and nor is it seeking to lobby publicly”.

Tony, you protest too much!

The Mayor condescended, “I dare say you see yourselves as stakeholders and have a real interest in the topic at hand.” Well…..  firstly, I live here; secondly, our community is dependent on continued viability of tourism, which includes camping numbers; thirdly, it is not the first time access to our beaches or our way of life has been threatened and finally, business owners and residents are also concerned about keeping our beaches for future generations.

For that matter, so does our community, which is why I would bother to drive almost two hours to Noosa for a meeting in the first place. Because you can bet that once again, meetings are Noosacentric, and I doubt teleconferencing is an option!

But really, why would the group call itself ‘Teewah and Cooloola Working Group’ if what the Mayor suggests is true : “Note also that the Group is focussed on driving and camping on Teewah Beach, not other issues pertaining to Cooloola. The group noted at the first meeting that the vast bulk of such visitors enter from the Noosa end and only a comparatively small number enter from Rainbow Beach.”

Well, we won’t know the answer to this until we have statistics for it. For the record, Teewah camping zone starts from the Noosa Council boundary, and extends 15km up the beach. That’s right – the entire camping zone is in our shire.

Then why is the working group top-heavy with Noosa bureaucrats?

That first meeting had under 20% of representatives from our shire, and who was there representing Rainbow Beach?

So, why did the working party come into existence?

The Working Party Secretary advised us that: The group has been coordinated to consider issues with regards to vehicles and camping on Teewah Beach between Noosa River and Double Island Point. This largely stemmed from unfortunate behaviour during the Easter long weekend during which environmental damage was caused to the vegetated dunes.

The words ‘unfortunate behaviour’ makes it sound like it was a choice. There was nowhere else to drive, due to unprecedented wash outs or erosion that coincided with the busiest time of the year!

Before long nature returned sand to the shore, but in the meantime mainstream media continue to sensationalise what they described as “overkill”.

Contrary to the Mayor’s protestations, The Noosa Council CEO Brett de Chastel reported that the working group “may also provide representations to QPWS, Queensland Police and the Minister for Environment and other relevant authorities”.

This does not qualify simply as innocent ‘information sharing’  to me. Agendas, calculated and controlled, and apparently above public scrutiny.

Their “concerns about the management of Cooloola,” the CEO said, focus on “vehicle numbers, vehicle access and damage to the environment”. Particularly, “too many vehicles and too much camping”.

Meanwhile, the group will also be able to contribute to the draft Great Sandy Area Management Plan – and we will hear about it when they are good and ready for public display. By then, won’t the horse have already bolted  – or camper numbers slashed?