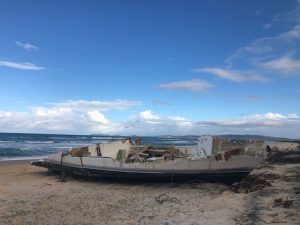 Last week the occupants of a 53 ft Riviera had to be rescued as their vessel caught fire and sank out from the Carlo Sandblow.

Dean Hayes from Rainbow Beach Recovery said: “We got a call from a Gold Coast salvage company to retrieve the vessel and remove it from the beach.

“The sleek $2.5 million, 2014 Riviera had drifted four miles north along Rainbow Beach and when we arrived Wednesday, it was 250 metres offshore, upside down on the outer sandbank.”

“We had to go out and hook it up with wire cables and dragged it onto the beach on Wednesday night and then Thursday we waited for the tide and got it above the high water mark with the loader.”

Dean said: “This will be the third boat this year we have had to recover. One was a smaller one at Inskip and the other one was on Fraser Island. It was such a shame to see such a beautiful boat destroyed.

“We don’t rescue cars and 4WDs much anymore, it’s mainly buses and trucks or off-road situations.

“Our main job now is waste management for national parks and Council and we service from halfway to Noosa to the top of Fraser Island. We also look after the general off-road freight, fuel sewerage.