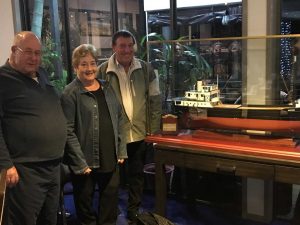 Gary Splatt, Maureen and Sam Mitchell from 7th Wave are happy to have the Natone on display at the Sports Club for everyone in Rainbow Beach to enjoy

For the good ship Natone, a colourful history which included fishing, Antarctic expeditions, cattle, the Navy, and even having a plane designed to fit her deck.  Add to this at least three name changes, and you have the fascinating story behind a vessel that eventually ran aground on Rainbow Beach.

The Natone has a very interesting history….a history that caught the interest of local model maker, Gary Splatt.

The ship was built in 1919 in Norway as a fishing vessel, Fv Fanejord. She was purchased by American Lincoln Ellsworth in 1933 for his Antarctic expeditions, who renamed her MV Wyatt Earp.

“Wyatt Earp was Ellsworth’s hero apparently,” laughs Gary. “He had a plane built to fit on her deck so he could fly over the Antarctic, she did four trips to the Antarctic.”

The Australian Government bought her in 1939 and she was renamed HMAS Wongala and served in the Australian Navy until 1947, when she was converted as an Antarctic exploration vessel and was recommissioned as HMAS Wyatt Earp in anticipation of her Antarctic voyage.

Finally, in 1951 she was decommissioned and sold to the Ulverston Line, who renamed her MV Natone, to carry cattle from Queensland to New Guinea. It was on a voyage from Cairns to Brisbane in 1959 that she ran aground at Rainbow Beach during wild weather. All on board survived the ordeal.

Gary decided to immortalise the Natone by constructing a static model of her. That was no easy task as the company from Norway that built her had gone bankrupt in 1952.

Incredibly Gary drew up his own plan! “I contacted the Norwegian Maritime Museum to get plans for her with no luck. That probably took the most time, trying to get some plans,” explains Gary.

“I eventually found a picture of her with people on board, so from there I was able to get the scale of her and after a lot of research and trial and error I was able to make my own set of plans. All up it took about two-and-a-half to three years to construct the model.”

Gary’s model of the Cherry Venture was purchased by Sharron and Rod Parker from Ed’s Beach Bakery and donated to the Sports Club. They also generously furnished the room that was to display the model. Gary dearly wanted the Natone to join the Venture and fortunately Sam and Maureen Mitchell from 7th Wave came to the rescue. 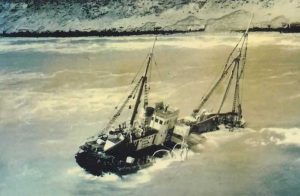 Sam and Maureen jumped at the chance to help Gary out. “I had heard of the Natone, of course, but didn’t really realise how big it was until I was shown a picture of Gary’s model,” explains Sam. “I was amazed and thought it would be good for the heritage of the town to have the Natone on display for everyone to enjoy.”

Adds Maureen, “It is a very interesting story of the Natone and Gary has told it through his model. We were more than happy to help keep the story alive.”

“I can’t tell you how pleased I am that Sam and Maureen stepped in to help. I really am thankful for their generosity,” said Gary.

It must be a wonderful feeling to see your work being appreciated by others?

“When I go to the Club it is nice to see people stop and look at the models. It is important historically for our town and a bit of a drawcard for the Club too.”

Gary has always loved boats and ships and has been building them as a hobby all his life. “I must have made at least three-to-four dozen toy boats for all the neighbourhood kids. That was fun. The kids loved sailing them.”

He has built static models (models in glass cases for the uninitiated, like me) and now does mainly working models. He has a working steam boat on the go at the moment! He even built a life size boat about twenty odd years ago.

Gary was born in Sydney and moved to the Gold Coast in 1962, where he worked as a carpenter until his retirement.

His son Craig has lived here for over twenty years and they used to visit here often when the kids were growing up. “I remember driving the kids up from the Gold Coast one day just to see the Cherry Venture after she ran aground.”

After his wife Carol passed away seven years ago he decided to come to Rainbow and test the waters, and luckily found an affordable house to buy.  “I wanted a quieter life. I adore Rainbow Beach, I love living here, it is wonderful to be near Craig and Tracey.”

As Gary stated, the two ship wrecks have really put Rainbow Beach on the map worldwide. “It is funny, you mention the Cherry Venture or the Natone to people and they will, more often than not, have a story to tell…. ’My dad was there when it came ashore’ or ‘I remember coming up as a kid and getting a piece of it’…. there must be bits of the Cherry Venture in lounge rooms all over Australia!”

Thanks to Gary and his dedication we have an important part of our history memorialised forever right here in our own backyard. Next time you see the models at the club, remember and appreciate the years that were dedicated to rebuilding that history for you.