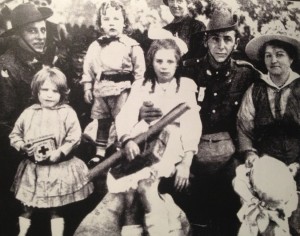 Family portrait: William (on the right) when he returned from Gallipoli and France, with Darren’s Nan (at bottom left) holding a red cross box

One hundred years ago this month, Aussies and Kiwis fought in Gallipoli. Rainbow Beach RSL Sub Branch member, Darren Davies talks about his personal connection with the ANZAC Centenary.

William Brown landed at Anzac Cove on April 26, 1915. He was just 21 and had left his very young wife and two toddlers at home.

Six months earlier, on October 20, 1914, William enlisted with the Australian Imperial Force as a Private. He was a horse driver with the 7th Army Service Corps Company, and sailed – like many of his young mates – from Sydney on a troop transport ship. The HMAT Port Macquarie made its way to Alexandria, Egypt which was the launching point for Anzac Cove.

At Alexandria, William was assigned to the AIF 4th Infantry Brigade Train. On April 12, he boarded a landing boat bound for the Gallipoli Peninsula which reached its destination on 26 April.

William was tasked with moving military supplies and sandbags by horse and cart to higher ground and assisting his Anzac comrades to dig in and hold their ground against the Turkish Ottoman forces. 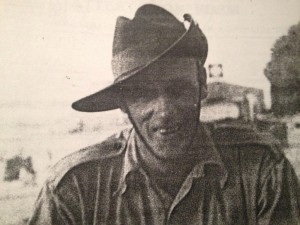 William survived 177 days and nights ashore at Gallipoli, but many of his mates from Sydney did not. However, on October 19, 1915 William was transferred back to the Gallipoli extraction beach due to a sustained cartilage injury. Soon after his recovery he re-joined 7AASC and for the next five months defended Ismailia along the Suez Canal from advancing Turks.

On June 6, 1916, alongside his mates and British counterparts under the British Expeditionary Force, he sailed to the Western Front in France to take part in battles against the German forces at Armentieres and Pozieres. With his AIF Infantry 4th Brigade he witnessed the devastating battlefields of Mouquet Farm and the Somme.

While he was in France William received news that his wife, Mary Ellen, was very sick with tuberculosis. On compassionate grounds he then repatriated from the field to base camp at Etaples and from there was transferred to England. The journey back to Sydney on board the HMAS Ulysses took three and a half months.

Sadly, his wife Mary Ellen Brown passed away before he reached home, leaving his two children, Lillian May (six years old) and her little brother Freddy who was just five. They were cared for by their grandmother, Isabella Brown, until William later remarried.

According to William’s great-grandson, Darren Davies – secretary of Rainbow Beach RSL – “He never wanted to talk about what he had endured overseas. Finding work was tough, yet William managed to find local work such as a grocery hand to support his second wife and two children.”

“Only my nan while alive could recall the difficult times in Sydney,” Darren said.

“Before the war my great-grandfather worked as a porter in Sydney, where he had lived since he was twelve years old.” 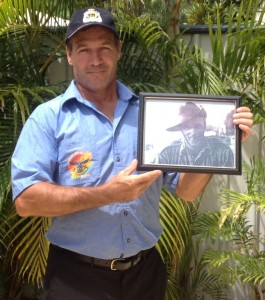 “William was born on October, 10, 1893 in Belfast, Northern Ireland to Irish parents, William Brown Senior and Isabella Kirkpatrick (Brown). He had four sisters and two brothers and was the third youngest.’’

“The family arrived in 1905 after a 53-day sea voyage and settled in Glebe. William Senior was a master printer and owned a linen factory and his wife was a dressmaker,” Darren said.

In 1925, William remarried. His second wife was called Ruby Hannan and they had two sons. He then signed up for WW2 on March 27, 1940 and his service lasted three years and 11 months.

William Brown was awarded the 1914/15 Star Medal, British War Medal, and the Victory Medal. He re-enlisted for service in WW2 with the Australian 3rd Infantry Force (6th Division) as Sergeant.

“I am very proud for the services from my great-grandfather, William Brown, and his mates contributed towards Australia and towards our flag, and the crown.”

“The Gallipoli campaign for us, as Australians, was devastating. We lost 7,779 infantry men and 362 of our officers – all brave Australians that sacrificed their lives to assist the Allied Forces. Nine Victorian Crosses were awarded to soldiers in Australian units.”

We will remember them…Lest We Forget.