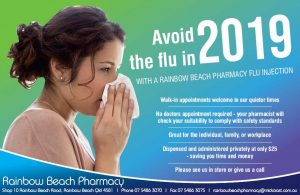 Queenslanders are being urged to become flu fighters and get vaccinated as soon as possible as the number of influenza cases across the State increases.

Across the State more than 9,100 cases of flu have already been confirmed in 2019.

Minister for Health and Minister for Ambulance Services Steven Miles said the high number of people already struck down by flu highlights the importance of annual vaccination.

“Our summer flu numbers are the highest they have been in five years,” Mr Miles said.

“We had a fairly mild flu season last year with around 15,500 confirmed cases. Our flu numbers this year are already over half that.

“While these figures do not necessarily predict the severity of traditional flu season ahead, they are concerning enough to encourage everyone to act now and protect themselves against the flu.

“A flu shot is still the best way to avoid getting sick and ending up in hospital.”

“We had a horror flu season in 2017 when more than 56,500 Queenslanders were diagnosed with influenza. That number fell in 2018, but flu cases this year are already up on what they were compared with the same time last year,” Dr Hajkowicz said

“There could be more cases in the community with people who may not be so sick as to go to the doctor or who may not have been tested.

“We’re on the frontline of the fight against flu and are leading by example.

“Our healthcare staff do a terrific job, but additional and sometimes unnecessary presentations in our hospitals during traditionally busy winter months can place an additional strain on resources.

“Flu is a serious illness that can lead to complications, particularly in the very young, elderly and people with complex chronic diseases.

“It can strike at any time and protection diminishes over time so we encourage everyone to get a flu shot as soon as possible to protect yourself and your family from getting ill and from spreading it to more vulnerable groups like the elderly.

“To avoid a trip to hospital, make an appointment with your GP or pharmacist now to ensure your family’s vaccinations are up to date.

“It just takes a few minutes of your time and prevents the possibility of becoming very sick if you catch the flu.”

“Historically, we see a strong correlation between the flu season and an increase in demand for QAS services and we’re expecting the same for the 2019 season,” Assistant Commissioner Zsombok said.

“It is anticipated the QAS will likely see an increase in demand of between six and 10 per cent in 2019. In recent years this has equated to between 6,000 to 9,000 additional incidents per month in the peak of the flu season.”

In Queensland, the flu season is typically from June to September, with a peak around August. The flu vaccine isn’t immediately effective; it generally takes 10 to 14 days to be fully protected after vaccination.

The Queensland Government funds a Childhood Influenza Program for all children aged from six months to under five years. Additionally, a Commonwealth-funded free vaccination program is available to eligible people, including:

All other Queenslanders can purchase the flu vaccine from their doctor or immunisation provider.

Simple tips to prevent the flu include: