Home  »  Community • History   »   Historical Cooloola: The story of the Mainstay 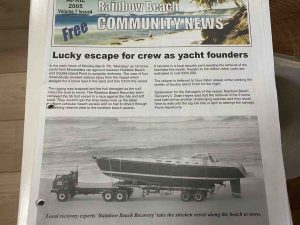 Shipwrecked in 2005, the sailing yacht, Mainstay, floundered on the beach at the Coloured Sand Cliffs.

In the early hours of Monday, March 7th, Mainstay, an 18 tonne yacht from Mooloolaba ran aground between Rainbow Beach and Double Island Point in complete darkness. The crew of four miraculously avoided serious injury from the impact which edged the 9 tonne keel in the sand and tore it from the vessel.

The rigging was snapped and the hull damaged as the surf rolled the boat to shore. The Rainbow Beach Recovery team retrieved the 56-foot vessel in a race against the tide and soft sand.

They couldn’t get the long heavy load up the steep southern vehicular beach access and so had to drive it through the bathing reserve area to the northern beach access…. Repairs to the million dollar yacht are estimated to cost $300,000.

The group arrived at the Groovy Grape, where she said their hunger was satisfied. So much so, she would like to include a photo of the cafe in her story of Mainstay’s last voyage, and what she says “was a terrible financial disaster”.

A search into the Community News and Groovy Grape owner Sandy Brosnan’s files have not turned up any images.

If anyone has a photo of the Groovy Grape from 2005 or thereabouts, please email: info@rbcn.com.au