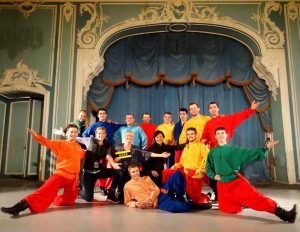 Tineka Williams with the traditional cossack dancers at the Beloselsky-Belozersky Palace in Saint Petersburg, Russia

Doing something you love until you are highly sought after in your profession is the enviable position Tineka Williams now finds herself in after years of hard work and study.

Tineka is a producer on such shows as The Amazing Race (Australia), I’m a Celebrity UK, Ich Bin Ein Star (German version), Prank Patrol and Pirates of the Caribbean 5 – Dead Men Tell No Tales.

She is also a wife, a mother of two children and lives in Tin Can Bay when she is not running around the globe.

She is away at the moment consulting on I’m A Celebrity: Get Me Out Of Here! which goes to air in the UK with ITV in November, and has recently been travelling as Country Producer with The Amazing Race Australia which started last week on Channel 10.

Tineka said: This series of The Amazing Race Australia has a variety of fantastic contestants and locations, and is definitely worth a watch.

“You really want a good mix of mental, fun and physical challenges that showcase the lives of the local people. The show is a great opportunity to learn about other countries.

“I had 20 flights in 30 days, often racing ahead of the crew to set things up. There is no time to adapt to time zones – you hit the ground running.

“It’s an exhausting, exhilarating and exciting life. I’ve been so lucky to travel the world exploring amazing places and making new friends.

“We immerse ourselves in the cultures and have fun testing challenges. In previous series I built giraffe feeders and met a witch doctor in South Africa.

“In Namibia I fed lions and walked with baboons at the Na’an Kuss Wildlife Sanctuary. We had to learn the clicking sounds of the beautiful SAN language.

“Outside of Prague we visited a chapel made of human bones, and in a nearby beautiful church I had to abseil from the spire, floating past the altar like an angel while the choir was singing.

“I flew into Israel, visited Tel Aviv and the Wailing Wall in the Old City. I’ve been wood chopping in Poland, traditional cossack dancing in Russia, rappelling castle walls in Dubrovnik, rafting in New Zealand and filmed at The Twelve Apostles, Uluru, Sydney and Fraser Island.

“The locations on the current series are embargoed to all who work on the show, but I can say it’s very exciting and as a reality TV show anything can happen.”  She can’t wait for her children, especially, to see where she’s been.

“It takes a lot of dedicated and talented crew to put these shows together.

“The biggest show I’ve worked on by far was Pirates of the Caribbean 5 – Dead Men Tell No Tales. One busy day I coordinated a shoot with over 700 cast, crew and extras. Plus animals!”

Tineka graduated with a Bachelor of Communications from Griffith University, majoring in film and media studies.

“After Uni I got a great job planning events but as I really wanted to do what I studied, I volunteered on short films and did work experience until I eventually took a pay cut with a job making tea and coffee in a post production house.

“I rapidly rose up to Facilities Manager and Post Producer, then moved into the freelance production world and now have 19 years of experience in the film and TV industry.

“It shows that hard work and networking definitely pays off.  You never know where the next opportunity is going to come from.

“It’s so important that young girls can see there are a variety of interesting jobs, and that with hard work and dedication you can do whatever you want to do. Dreams can come true. And all while still living in one of the most beautiful places in the world!

“And none of this would be possible without saying thank you to my amazing husband and mum. I’m so lucky to have such a great support network… that’s really what makes it all possible when you have young children!”